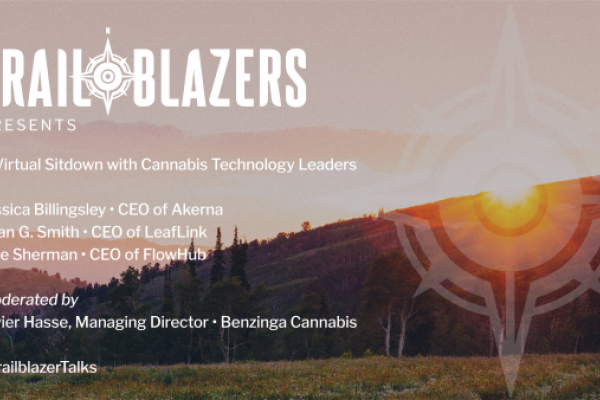 Watch The ‘Trailblazers’ Virtual Session On New Technology In Cannabis

Trailblazers, a curated community of cannabis business and cultural leaders who work to advance the industry, unified by a shared ethos and vision of the future, has moved its closed-door events to the digital realm.

In the first session, “New Technology In Cannabis,” you can enjoy a virtual conversation discussing the state of technology in the cannabis industry and what’s the come. Join Kyle Sherman, Jessica Billingsly, and Ryan Smith in this insightful conversation moderated by Benzinga’s Javier Hasse.

Don’t miss this opportunity to connect with THE cannabis movers and shakers from across the globe during Benzinga’s first Virtual Cannabis Capital Conference on June 1.

Prior to co-founding LeafLink, Ryan successfully started and exited two companies, one of which he sold to an NYSE public firm.

Ryan brings his experience creating and managing B2B firms and online marketplace investment in highly-regulated spaces to cannabis as LeafLink’s Chief Executive Officer. LeafLink, the cannabis industry’s wholesale marketplace, is defining the way that thousands of cannabis brands and retailers manage and track their orders and relationships, so they can focus on growing their businesses. Backed by leading venture capital firms and strategic investors such as Thrive Capital, Nosara Capital, and Lerer Hippeau, LeafLink has raised more than US$51 million to date, and has offices in New York City, Los Angeles, and Toronto. In 2016, Ryan was the first CEO of a cannabis company to be listed on Forbes’ 30 Under 30 list.

In February 2018, LeafLink was the first company in the cannabis space to make Fast Company’s 2018 list of Top 10 Most Innovative Companies in Enterprise.

Jessica Billingsley serves as Akerna’s Chief Executive Officer. In June 2019, she became the first CEO of an ancillary cannabis company to be listed on Nasdaq. She co-founded MJ Freeway in 2010, where she served as President until April 2018, and later as the CEO until MJ Freeway was acquired by MTech to form Akerna (NASDAQ: KERN). In 2015, she was named as one of Fortune’s Most Promising Female Entrepreneurs, in 2018, she was named one of Inc. Magazine’s 100 Female Founders, and in 2019, she was named to Entrepreneur’s inaugural list of 100 Powerful Women.

Prior to MJ Freeway, Jessica earned her degree in Communications and Computer Science from the University of Georgia and later became CEO and founder of Zoco, a technology services firm with clients across the United States. With 20 years of technology and systems experience in rapidly scaling businesses, Jessica is a highly regarded executive in both the tech and cannabis space.

Kyle Sherman is the founder and CEO of Flowhub.

Kyle has been named a Top 100 Cannabis Leader by Entrepreneur Magazine, 30 AND UNDER by Business Insider, and is an associate producer for the documentary “Weed the People” which aims to educate mainstream audiences about medical cannabis as a human rights issue. In 2014, Kyle lobbied the Colorado Department of Revenue to build the Metrc API, which is now the standard used for cannabis tracking in 11 markets. Kyle also serves as a founding director and treasurer on the Cannabis Trade Federation (CTF) board, an organization focused on building an inclusive industry and passing the STATES Act.

His book, “Start Your Own Cannabis Business,” was published by Entrepreneur Media in 2018 and hit the #1 Best-Seller spot on Amazon.

The preceding article is from one of our external contributors. It does not represent the opinion of Benzinga and has not been edited.

© 2020 Benzinga.com. Benzinga does not provide investment advice. All rights reserved.