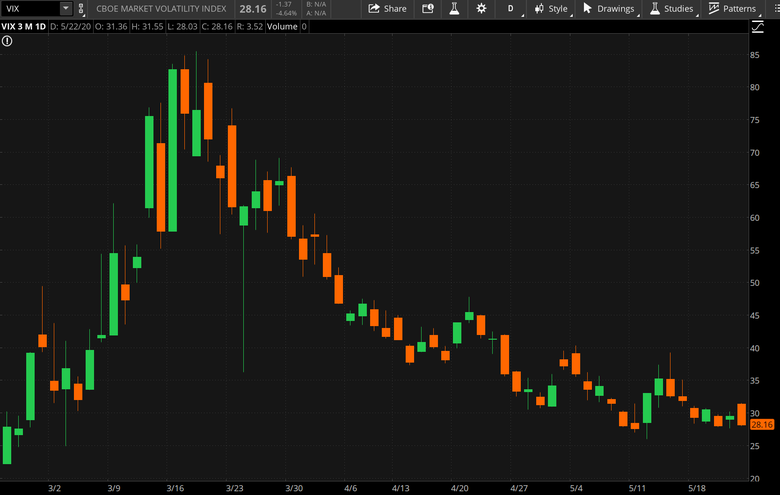 (Tuesday Market Open) U.S. investors and traders returned from a long holiday weekend with an apparent continued sense of optimism about prospects for a coronavirus vaccine and the reopening of the domestic economy.

In addition to holiday goers getting out over the Memorial Day weekend in the United States as restrictions ease, there were also signs of reopening in Spain, Germany, and Britain, and news that a German airline will resume flights to 20 destinations in June.

The positive tone sent index futures sharply higher overnight, with futures on the S&P 500 Index (/ES) ticking above 3000 for the first time since early March.

But tensions with China continued to simmer. Beijing denounced the United State’s plans to add nine Chinese organizations to a list restricting their access to U.S. technology. Separately, a U.S. administration official said the U.S. would likely sanction China if it implements new national security laws in Hong Kong.

The Week That Was

By the end of the day Friday, it looked like many investors and traders didn’t want to carry too much risk into the long weekend. But at the same time, it seemed like optimism was prevailing and market participants didn’t want to lose out on potential upside either, amid encouraging news on the vaccine front and hopes for the economic reopening. That left the main three indices mixed for the day but up markedly for the week.

For the week, the main three U.S. indices were up more than 3% as the hope trade was alive and well. The Russell 2000 (RUT) was a standout, rising more than 7.8% on the week. Because of its focus on domestic small- and medium-sized companies including regional banks, the gains in the RUT arguably represent the ultimate trade on optimism about the U.S. getting back up and running.

Among sectors, Industrials did pretty well, with a rally of 7.2% on the week. Energy gained more than 6% as oil prices rose on the outlook for demand as the U.S. gets back up and running, the outlook for travel gets healthier, and major producers have announced output cuts.

On the other side of the spectrum, Consumer Staples rose just 0.25%. It seems that stocks that were hot in recent days as the public stocked up on goods at grocery stores aren’t doing as well as consumers may have already gotten much of what they need for the time being and businesses reopen, albeit gradually, allowing people to get out more.

Meanwhile, Health Care declined by 0.78%. Part of that maybe that healthcare stocks tend to be defensive and fall when other sectors, perceived as riskier growth opportunities, rise. Some healthcare companies have also been suffering as some hospitals haven’t been able to do elective procedures, and some folks have been avoiding doctors and hospitals because they’re worried about catching the coronavirus.

There also seems to be an element of speculation that has crept into healthcare stocks as investors and traders have been hoping for a vaccine or treatment from one of many companies working on them. So it may bear watching whether healthcare stocks will resume their more defensive stance during risk-off days.

Turning to companies, Southwest Airlines Co (NYSE: LUV), Boeing Co (NYSE: BA), Marriott International Inc (NASDAQ: MAR), and American Express Company (NYSE: AXP) did well on the week in what appears to be another example of the optimism trade at work as market participants are more hopeful about the prospects for travel and consumer spending.

On the losing side of the ledger, Campbell Soup Company (NYSE: CPB), Netflix Inc (NASDAQ: NFLX), Clorox Co (NYSE: CLX), Conagra Brands Inc (NYSE: CAG), and PepsiCo Inc (NASDAQ: PEP) all lost ground on the week as it looked like the stay-at-home trade was fading.

In earnings news this week, while the season is winding down, investors may want to take a look at earnings and executive commentary from Carnival Corp (NYSE: CCL), Toll Brothers Inc (NYSE: TOL), and Costco Wholesale Corporation (NASDAQ: COST) to try to get a better sense of how the travel, housing, and grocery industries have been doing and may fare going forward.

Also, in the retail space, it could be interesting to tune into earnings from both ends of the spectrum. On the higher end, Ralph Lauren Corp (NYSE: RL) and Nordstrom Inc (NYSE: JWN) open their books this week, as do bargain retailers Dollar General Corp (NYSE: DG) and Dollar Tree Inc (NASDAQ: DLTR). It could be interesting to see how much online sales helped RL and JWN weather the coronavirus-sparked shopping downturn as well as how much people were stocking up on lower-cost goods during the pandemic.

CHART OF THE DAY: VIX FIX. Wall Street’s main fear gauge, the Cboe Volatility Index (VIX), has been on a declining trend as market participants have become more hopeful about an economic recovery that could make the coronavirus-sparked corporate earnings downturn short-lived. Data source: Cboe Global Markets. Chart source: The thinkorswim® platform from TD Ameritrade. For illustrative purposes only. Past performance does not guarantee future results.

How Low Will GDP Go? There’s been plenty of jawing about whether the economic downturn and recovery will look like a V, U, W, or swoosh. For argument’s sake, let’s say the U.S. recovery ends up looking like a V. The question remains how deep the lowest point of that V goes. The latest GDPNow estimate from the Atlanta Fed shows real seasonally adjusted annual gross domestic product contracting by 41.9% in the second quarter. That estimate is generally in line with those of some major banks. For that figure to end up being the bottom of a V, it seems like the current economic reopening would really have to get some legs under it and not end up being hamstrung by a potential second wave of infections.

COVID-19, China GDP, and Trade: China last week didn’t set a target for its annual GDP figure. The move comes after it reported a 6.8% annual decline in the first quarter, the first GDP decline since China started reporting the metric in the early 1990s. For some time now, the market has expected a global GDP crunch, including in China and the United States. But it was interesting to note that the Chinese premier said the move to drop its estimate was not just because of uncertainty regarding the pandemic. He also cited the global trade environment. That appears to be a nod to rising tensions between the world’s two largest economies that have had traders and investors on edge in recent days, bringing to mind the trade war that only cooled down earlier this year.

Personal Spending Expected to Drop 15%: Looking ahead to U.S. GDP, one of the closely watched economic reports that go into the GDP calculation comes out on Friday in the form of the personal income and spending report. A Briefing.com consensus expects personal spending to decline by 15% while personal income dips by 6.5%. These reports are generally highly watched by traders because personal spending makes up such a huge driver of the economy. But this report, in particular, bears mentioning because it marks the first one to record personal income and spending in a month that started with lockdowns already in place. The previous report captured a month when the economy was starting to react and showed a decline of 7.5% in personal spending. Of the March report, Breifing.com said: “It is a precursor to what will be much worse data for April, which will drive a much worse decline in GDP than the 4.8% annualized decline registered in the first quarter.”

© 2020 Benzinga.com. Benzinga does not provide investment advice. All rights reserved.